iOS 7 keyboard, there is still a dot com shortcut

With all the noise, hype, and misinformation about the new gTLDs (1000+ new top level domains) being unleashed on us by ICANN (which benefits financially from this misguided launch), here's a small voice of sanity amongst the fray. What does the world's biggest corporation, which also happens to be a technology, internet savvy company, co-founded by the renown Steve Jobs, think of the new gTLDs? Uh, not much-- Apple bought only 1 gTLD, for defensive purposes, ".apple." And as for the often heard pronouncement that Apple "did away with the .com on the keyboard" --

Secrets of the iOS 7 keyboard | TechHive: "Although the iOS keyboard often anticipates your needs, you’ll probably be surprised to see some buttons missing. The ‘.com’ key that formerly appeared when you typed, for instance, in Safari’s address field, has gone AWOL. Don’t fret; there’s still a .com shortcut, you just need to know where to find it. Tap and hold the period (.) key to make a pop-up menu appear. Then, slide your finger up to the ‘.com’ button." 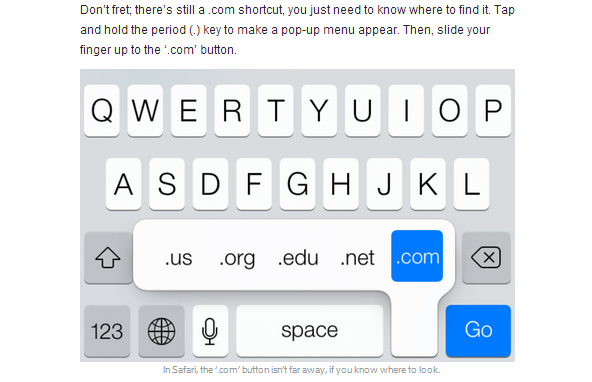 Funny, I don't see ANY of the new gTLDs! LOL!