The sole item on the Agenda: Procurement of the Secretariat for the ICG

Secretariat candidates' identities were not disclosed, but there are two final candidates. Decision to be finalized on or before November 15, 2014.

Additional discussion concerned future calls and meetings (dates/times) and the uncertainty about the ICANN meeting in Marrakech. The ICG has handed off substantive IANA transition work to "three communities" (names, numbers, protocols) it maintains are the ones affected by the IANA Stewardship Transition via RFPs (Requests for Proposals) with a tight timeline in order to submit its final proposal to the ICANN Board of Directors for transmission to the US Department of Commerce's NTIA well before the "final deadline" of September, 2015.


Work has started in the "three communities"--e.g., IETF's (protocol parameters) latest draft is at: http://www.ietf.org/id/draft-ietf-ianaplan-icg-response-02.txt--but according to ICG member Keith Drazek (via chat window during the ICG call): "I would also point out that the Naming community is struggling with the January [15, 2015] target date for delivery, so scheduling should take that into account."

The ICG timeline  originally indicated that the ICG would submit its proposal directly to the NTIA. Subsequently, the NTIA indicated that the proposal was to be submitted via the ICANN Board of Directors which has led to concerns that the ICANN Board may modify (or even reject) the final ICG proposal. During the conference call, ICG member Lynn St. Amour briefly discussed her draft of "ICG's expectations regarding the proposal submission" (excerpts below): 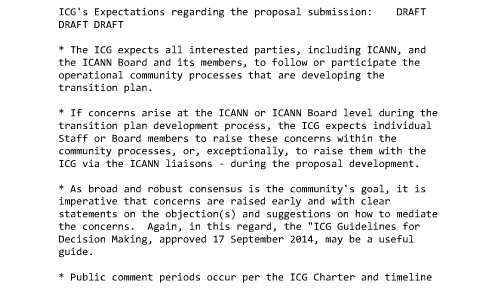