ICANN Told To Nix .Wine and .Vin by US Congresswoman Anna Eshoo

In a letter to ICANN's Fadi Chehade, Silicon Valley's Representative to the US Congress, Anna Eshoo, has reiterated her concerns about ICANN's new gTLD domain names program, and specifically, that .wine and .vin, (both of which were objected to by the governments of France, Spain, Portugal and others) be "permanently withdrawn from consideration" --

"Since ICANN first announced its plans to launch new gTLDs, I’ve expressed concerns regarding the economic impact, the potential for consumer confusion, and the increased cybersquatting that could occur without proper checks and balances. While I do not oppose the outright launch of new gTLDs, each application must be carefully scrutinized and take into account the concerns of impacted stakeholders. . . . I urge you to advocate for the .wine and .vin gTLDs to be permanently withdrawn from consideration…. "(emphasis added) -- full letter below: 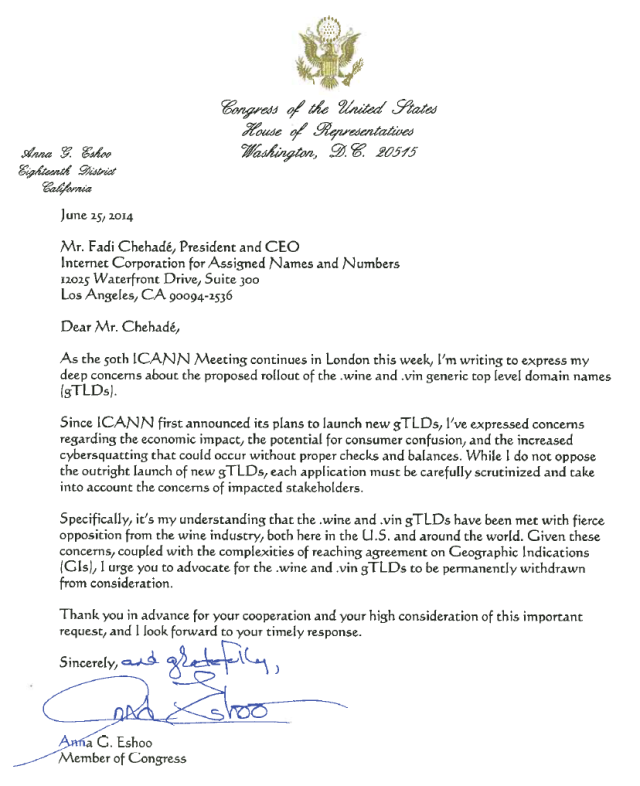 Rep. Eshoo serves as the Ranking Democrat Member of the Energy and Commerce Committee's Subcommittee on Communications and Technology for the 113th Congress. Serving in Congress since 1993, she represents California's 18th congressional district which includes part of Silicon Valley and includes the cities of San Jose, Redwood City, Sunnyvale, Mountain View and Palo Alto.